Aston, a new British microphone manufacturer who aim to “achieve the unachievable… to design and build high quality, handcrafted and affordable microphones in the UK”, has recently launched two microphones into the home-studio project marketplace: the Origin, and the Spirit microphone. Both include innovative design features and are competitively priced at £200 and £300.

The Origin is a fixed pattern cardioid condenser with a switchable high pass filter and a 10dB attenuation pad. The Spirit is a three-polar-pattern (cardioid, figure of 8 and omnidirectional) condenser with an 80Hz high pass filter and three attenuation pad settings (0dB, -10dB and -20dB). I decided to try both microphones side by side to see how they worked in harmony together, assess their strengths and weaknesses and hear how they compared to a range of other microphones. Here are my thoughts…

Each microphone is supplied in a cardboard box made from 100% recycled material; the packaging is basic but provides adequate protection. 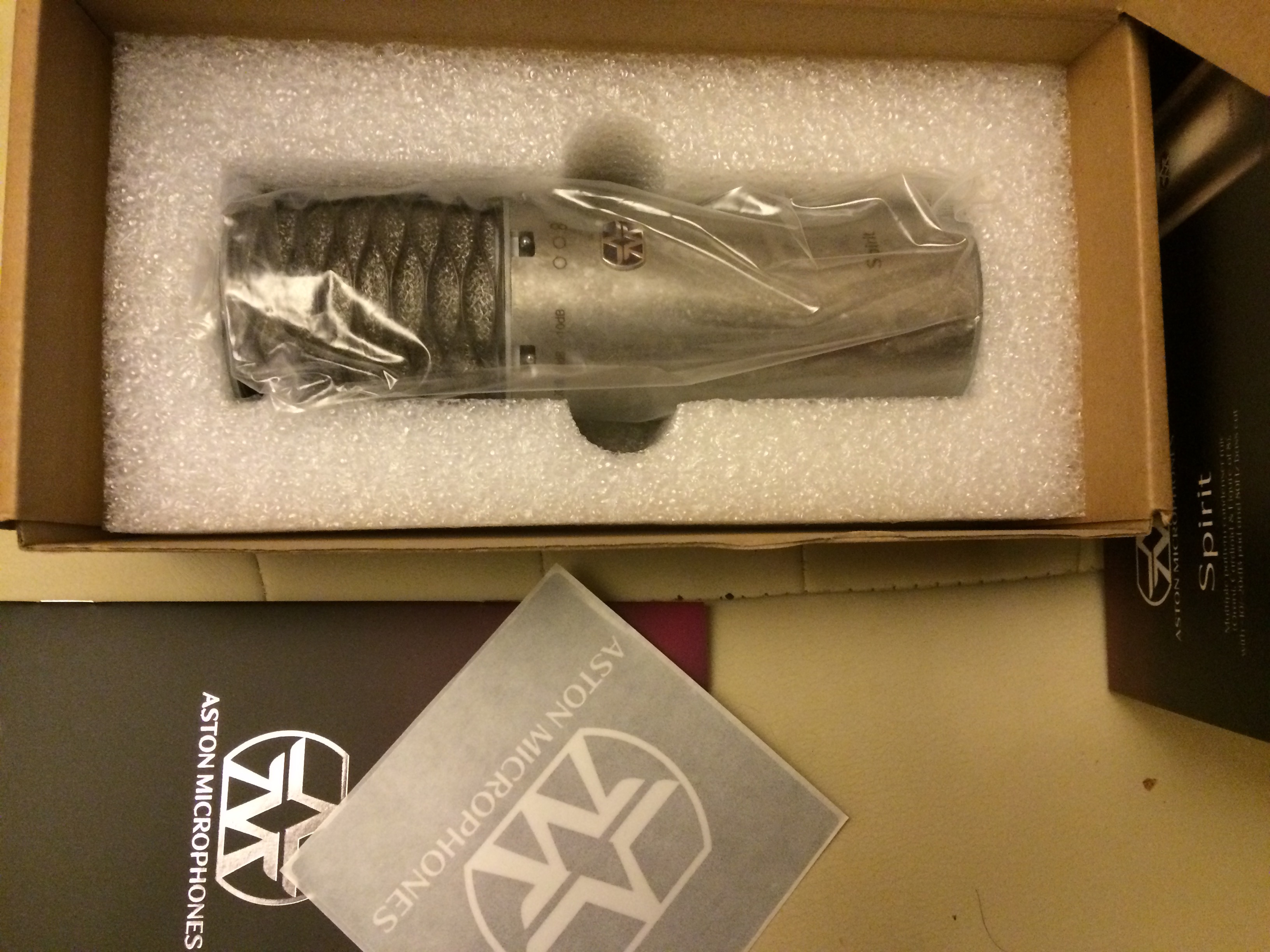 Both microphones are striking in appearance with a brushed steel housing and an unfamiliar housing basket that surrounds the capsule. Aston calls their unique basket design a ‘Waveform Mesh Head’. It utilises a spring mechanism to protect the microphone diaphragm from accidental damage, and is flexible; should any deformation of the basket occur, it can be easily pushed into its original shape, retaining the microphone’s original features, even if dropped or squashed.

The basket also features a wire-mesh sock that surrounds the microphone capsule, thereby creating an inbuilt pop shield to protect against unwanted vocal plosive sounds; sounds caused by blasts of air, usually produced by words beginning with ‘p’ and ‘b’.

Each microphone capsule is suspended within an internal shock mount system. This means the microphones can be directly mounted to a stand without the use of a shock mount.

Over several days I tested each microphone in a variety of live and more controlled ‘testing’ environments, using other popular microphones for comparison. As both microphones have been designed with guitar and vocal in mind, I worked with a variety of singers and guitarists.

When recording a singer/songwriter who played sang and played acoustic guitar simultaneously, I used the Spirit in a figure of 8 bi-directional pattern for vocals, and the Origin for guitar. The Spirit behaved as expected, with excellent rejection from the guitar on a 90-degree axis. The Origin performed well on guitar duties, with a bright, present tone and clear transient detail.

In a session recording rap vocals I found the clear, defined midrange of the Spirit to be a real asset. The Origin also performed well but didn’t feel quite as dominant in the mix. However, with both microphones the words were clear with the transient detail of consonants captured well without excessive easing. In this particular session, both Aston microphones were chosen in favour of an SE Electronics 5600aii.

With the help of fellow lecturers in the department of music at Canterbury Christ Church University, I compared each Aston microphone to a range of other microphones including: Rode NT1, Audio Technica AT4033, Blue Baby Bottle, AKG414xls and Neumann U87. I have compiled the following audio and video clips so you can hear for yourself.

Aston Origin vs Audio Technica AT4033 vs. Rode NT1 on electric guitar…

When comparing the two Aston’s to each other, I found that the Spirit had an extended high frequency response, with more sense of air and a richer, more detailed bottom end. The Spirit also sounded, to my ears, more three-dimensional with increased depth to the sound stage and a more rounded, smoother tone. The Origin was a little more fragile sounding with less definition in the 800Hz-2kHz regions. The Spirit’s output is slightly stronger, as is consistent with the documentation, and has slightly less noise than the Origin, although the specifications state that both have an equivalent noise rating of 18dBA.

Aston Origin vs Spirit vs Rode NT1 on male vocal…

“As a vocalist, I see the microphone as my instrument. We all know that you can fix a lot in the mix, but what you can’t fix is the performance, and part of the performance as a singer, comes from the way you feel about how you sound. If you like the sound which comes back to you in your headphones, this inspires you to a greater performance and make the whole experience of recording more enjoyable and more artistically satisfying. It encourages you to be brave and explore your boundaries more. In our tests, both mics fulfilled that role and I very much enjoyed working with both of them, but I have to say that the Spirit was my favourite. For most vocals, I use my Neumann U87 or M147, and the Spirit gave me a similar feel while using it, and it sounded great on the recording too.
How a microphone can actually affect the performance of a vocalist is something which is often overlooked, but is an important thing to remember when choosing the right mic.“

When experimenting with the Spirit microphones various pick-up patterns, I noticed that in omnidirectional mode there was significant off-axis colouration with a noticeable dip at lower frequencies when addressed even slightly off-axis. In simple terms, the microphone’s tone changed quite drastically when not addressed front face on. While this is not that unusual, some users might mistakenly think the omni directional mode will capture sound evenly across 360 degrees, especially as the supplied frequency response graphs for the figure of 8 and omnidirectional patterns indicate a smooth polar response, only stating frequency plots for 16kHz and 1kHz respectively.

For singers, the built in pop shield is most effective when positioned 30cm or more away. However, when too close to the microphone some popping is evident. I would personally continue to use a pop shield with either microphone, unless I was working with a singer with exemplary mic technique. For anyone else I would suggest using a pop filter for, if nothing else, ensuring singers stay an appropriate distance from the microphone. The built in shock mount proved to be effective, at no time did I notice problems when used without an external shock mount.

Suitability for Guitar and Voice:

Through a variety of recordings I found that they were consistent for either guitar or vocal recordings and conclude that they are a safe bet if you’re looking for an all-round microphone that can accomplish both tasks.

Both microphones performed well, with a clear, crisp and focused sound with a presence with boost around 5kHz. The sound is punchy, clear and crisp with a smooth and detailed top end. To put it bluntly, they sound great.

If you would like to hear the original audio files then get in touch via the contact page.

A big thank you to the musicians who provided their time during test and live recordings, including: Dudley Ross, Simon Foster, Jeff Alexander, Skip McDonald and Steph Dickinson, plus an extra special thank you to Simon Foster for securing the microphones for testing and organising recording sessions.