Living in a box…

I’m working from home quite a bit these days and much as I love having a whole studio within my laptop, I miss some of the vibe found when working with analogue hardware. While MIDI controllers are excellent for injecting a bit of a human feel into what can sometimes feel like a “stale” computer environment, it’s nice to get your hands on some buttons now and again. So, I decided to treat myself to a new toy; something inexpensive that would inject a bit of fun into the creative process.

I checked out a few guitar effect pedals but found myself drawn to analogue filters. Filters feature heavily in my sound design and I love using them for audio mangling and enhancement. I’m a fan of vintage Sherman and Arp filters but the Sherman Filter Bank is out of budget, at the moment, and my Arp Odyssey II has seen better days. 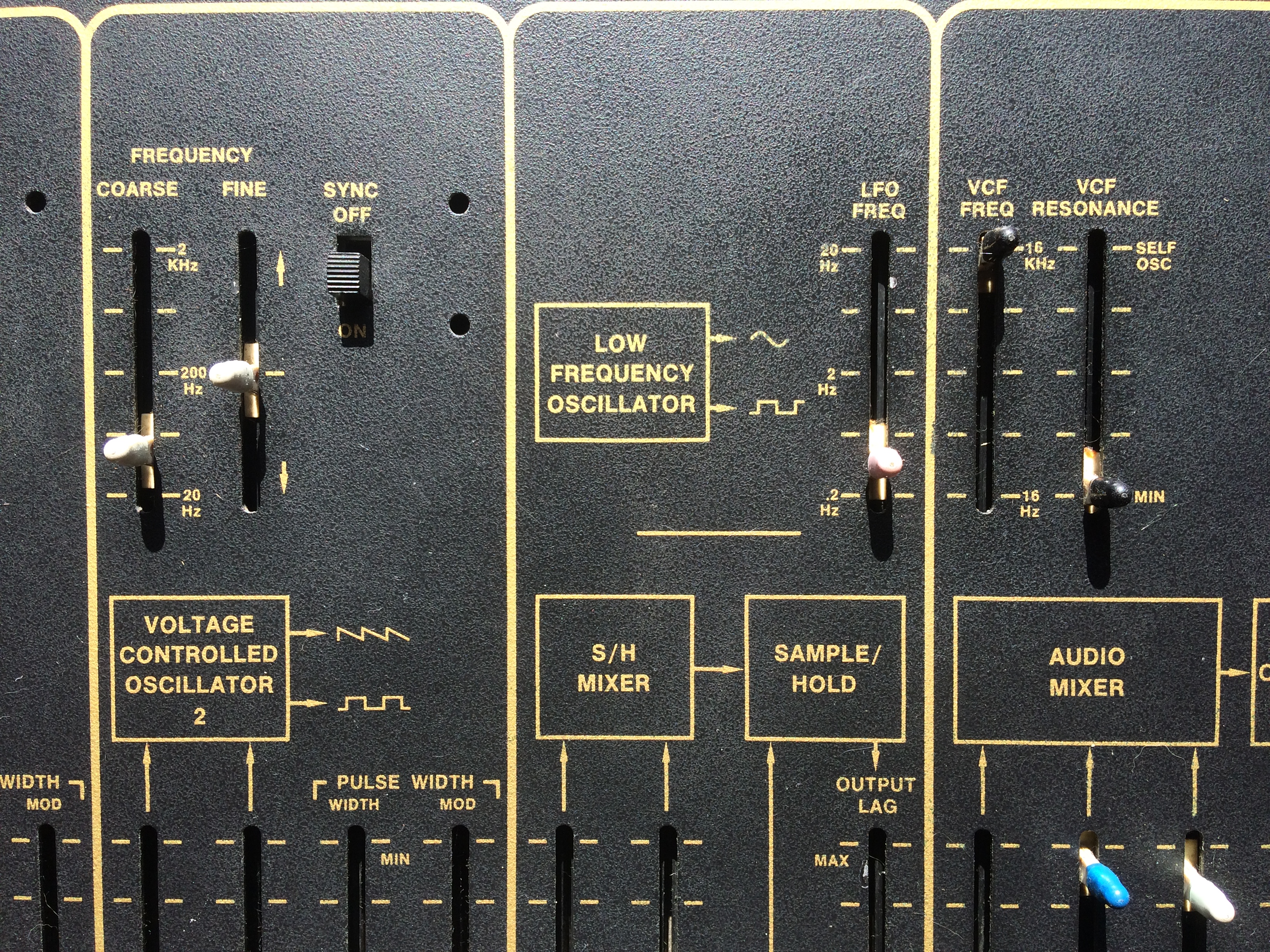 After searching online I found the Waldorf 2-Pole Analog Filter, and bought one based on its positive reviews, audio clips, and affordability. When my friend and former studio cohort Nick (aka Desecration) asked how the Waldorf compared to computer-based plugins, he suggested that readers of my blog, particularly people who work entirely ‘In The Box’, might be interested in hearing how the two differ. So, I ran a drum sample through the Waldorf 2-Pole Analog Filter and Logic’s Auto Filter to compare the two.

For the uninitiated… (If you’re up on this, skip to About the Test)

Low Pass Filter’s (LPF) behave by lowering or attenuating the higher frequencies present in a signal, progressively dulling the sound as the filter frequency decreases.

You might assume this means that a sound processed by a LPF, with its frequency set to 100Hz, would render a frequency of 101Hz inaudible. However, this is not the case. All analogue filter designs exhibit a sloping frequency response, measured in decibels per octave. The decibel, or dB, is the unit used to measure the loudness or amplitude of sound and an octave, or 8ve, is a musical interval equal to a doubling/halving of the audio frequency. For example: the concert tuning pitch of A has a fundamental frequency of 440Hz. Therefore, one octave above this is 880Hz and one octave below is 220Hz. The point at which the signal is attenuated by 3dB is called the cut off frequency. Beyond this frequency, the slope is measured in 6dB steps (6dB is equal to a halving of amplitude). If we use a 6dB per 8ve Low Pass Filter, and set the cut off frequency to 440Hz, sounds at 880Hz frequency are attenuated by 6dB (or half the amplitude), sounds at 1760Hz attenuated by 12dB, and sounds at 3520Hz attenuated 24dB. Looking at the diagram below, you can see the attenuation slopes for three different Low Pass Filters. The 6dB per 8ve filter has the gentlest cut off slope, followed by 12dB per 8ve and 24dB per 8ve filters 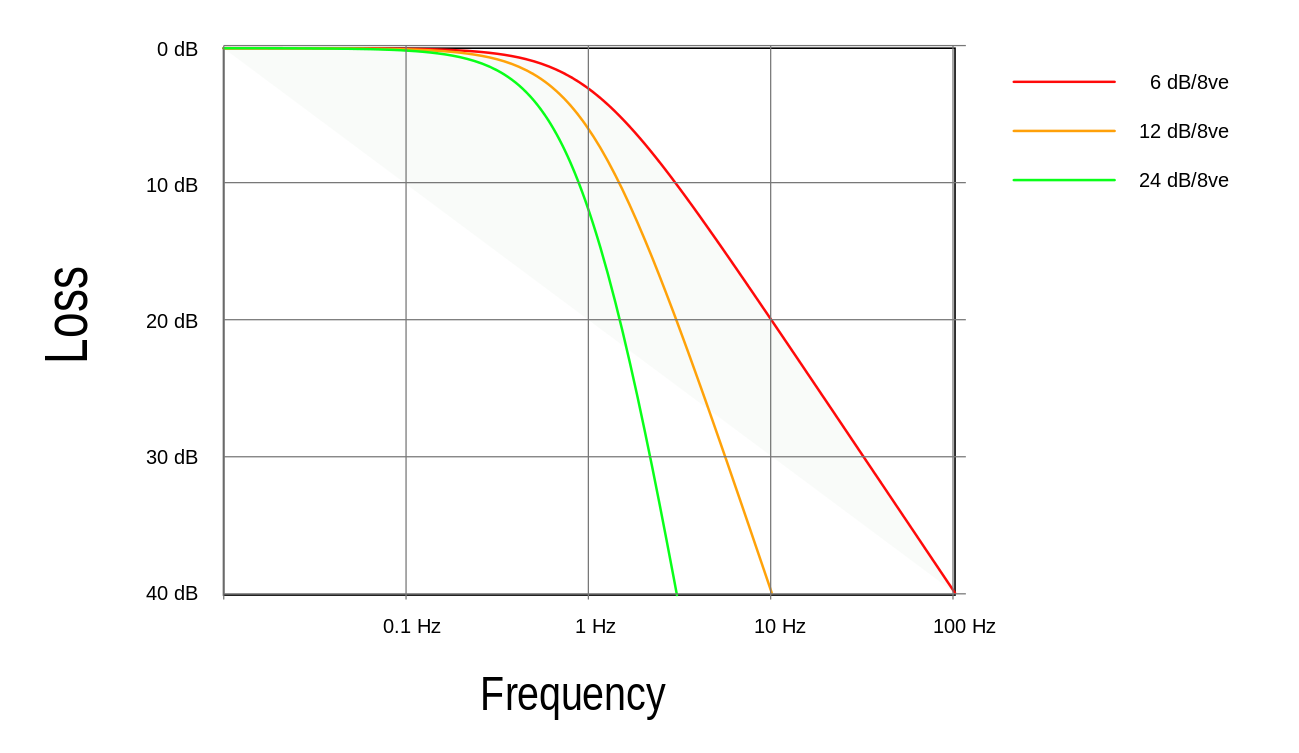 Another term used to describe this filter characteristic is the Pole where 1 Pole is equal to a reduction of 6dB. Devices are therefore often labeled as 2-Pole (12dB), 4-Pole (24dB) or 8-Pole, etc. and this is where the Waldorf derives its name. 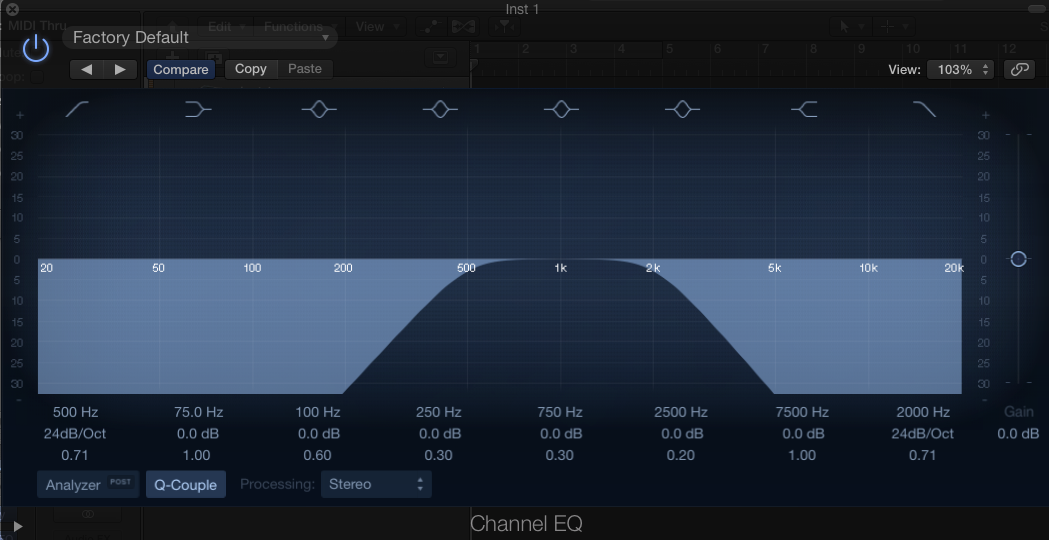 Many filter designs also feature a resonance control, which boosts the frequency just before the cut off point. This is achieved by feeding back the output signal, at a reduced amplitude back to the input stage of the filter. The resonance control can be used to either create a subtle thickening of the sound, or the wild ringing tone often heard on old Acid House records. 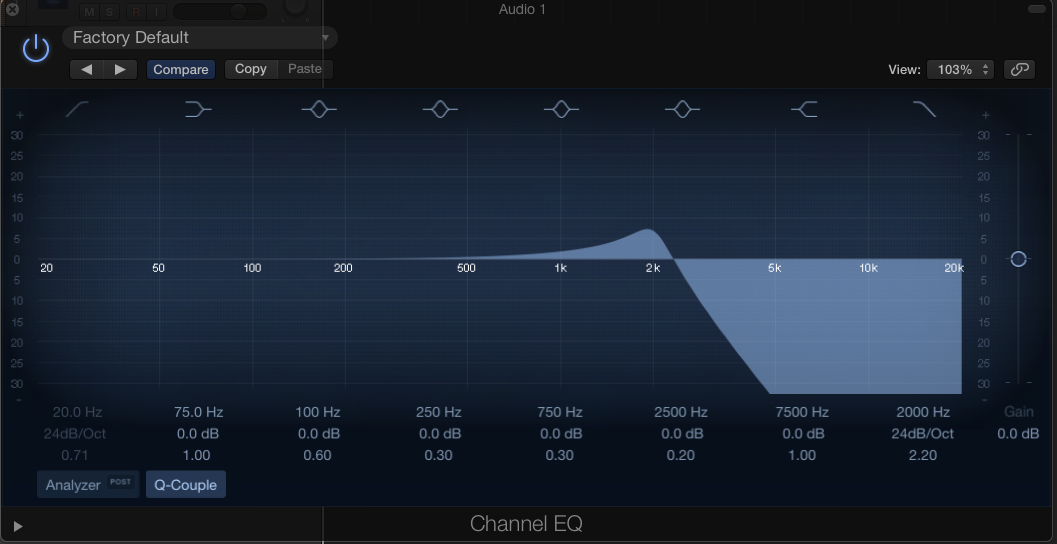 Other features common to both units include…

To make the comparison as fair as possible, I have only used filter features that are common to both the Waldorf 2-Pole Analog Filter and Logic’s Auto Filter. The Auto Filter’s processing operated entirely within Logic, while the Waldorf filter passed through both digital to analogue and analogue to digital converters via a MOTU 1248 AVB interface. The Auto Filter was set to the 12dB per 8ve setting to match the Waldorf’s 2 Pole design.

Further, a mono audio file was used for the test, as the Waldorf is a mono unit. I have excluded the many stereo effects Auto Filter can provide, as well as the different LFO waveforms. And from the Waldorf, I excluded the rectify control and additional envelope triggers. The remaining filter settings were matched as closely as possible, and the audio files were normalised to 0dBfs. However, as you will hear, there is some variation in level, primarily because the Auto Filter had a tendency to create sharp, transients peaks, while the Waldorf’s response was much smoother, leading to a higher average listening level.

I have provided just a small taste of the potentials sounds that can be created with these units, but the following clips will give you an outline of the sonic character of both.

The next clip features the filter being modulated by the Envelope Generator.

Both units feature a drive section, this can be used to thicken the sound or create interesting distortion effects…

Both units feature a side chain input…

In this clip another drum loop was routed to the filters side chain input, which affected the filter response as it acted on a basic synth tone.

Here the LFOs on each unit were set to a faster speed, with the resulting modulation causing a lo-fi distortion effect. 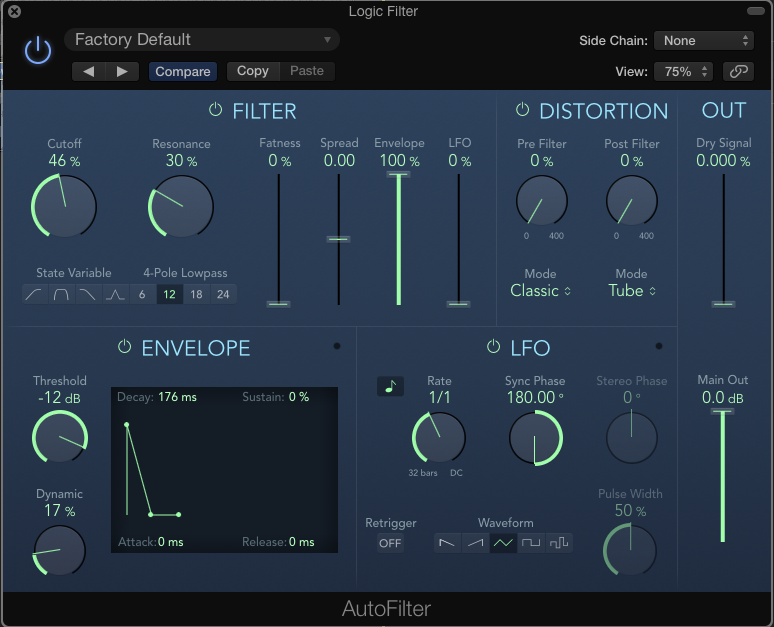 Unlike the Auto Filter, the 2-Pole is capable of self-oscillation. This means the unit can create sound without an input source. Self-oscillation occurs when the resonance control is set from approximately 70% upwards, and it can be used to create sounds like kick drums, dub sirens or old-school arcade blips and beeps.

I hope you enjoy listening to the comparisons and find them useful. As always, feel free to leave comment or get in touch via the contacts page.

Matthew Smyth aka The Home Studio Doctor is an audio engineer, remixer and educator with over 20 years professional experience working within the music industry.